Privateers! – The Board Game

Privateers! – The Board Game

It’s the golden age of piracy. The war is over and port cities all over the world are filled with unemployed soldiers and sailors. They will do anything to survive and get rich, and many take their chances on the high seas. They live short and violent lives, at least those without the protection provided by a letter of marque. 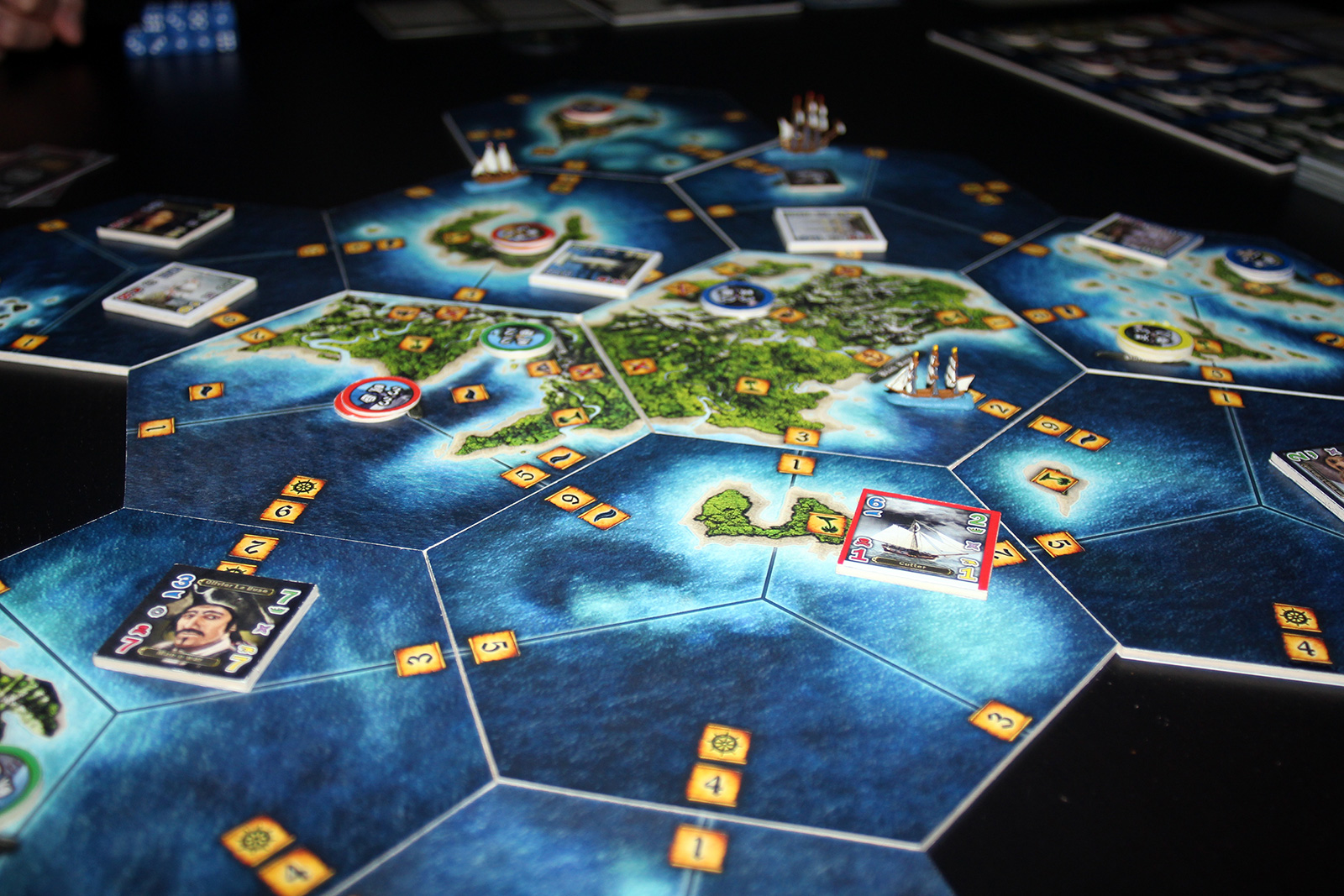 Privateers! is an exciting pirate game in the Golden Age of Piracy. You take the role of a privateer for a mighty colonial power. You get a ship and a crew from the crown, to be able to plunder and burn your way across the Caribbean. If you do it right you will lead your country to victory and complete domination in the area.

Beware of your enemies, though. Pirate hunters, mighty warships and legendary pirates will try to stop you at every turn. Even aliens and the unspeakable horrors from beyond our world will work against you and try to see to it that your colonial power is cast out from the area. So load your musketoon, take your cutlass and gather yer mateys. For war and strife is about to engulf the Caribbean.

We are recommending the game for ages 15 and up. Younger kids will be able to play it without problems, but some cards contain monster horror, sex, murder, slavery, injustice and other adult themes.

The goal of the game is simple, decrease every enemy nation’s Influence value to 0 and defeat their last attempt at taking back what they have lost. The latter is determined by a defeat card and often results in a boss marker being spawned.

The game board is created using map tiles and is dynamically generated to help make sure no game is another alike. Colonies, ship markers and players are added when the map is finished. 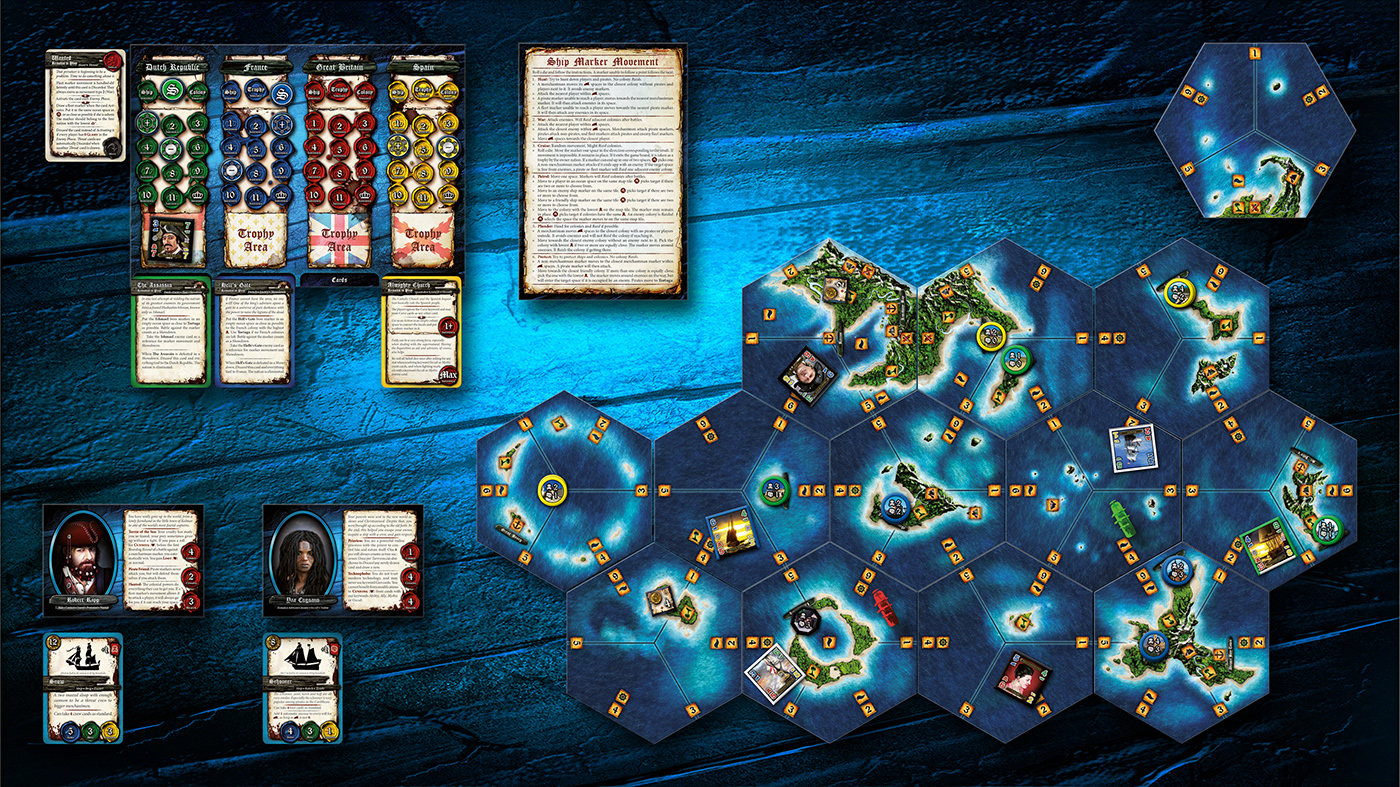 How long a game will last is largely based on the Influence tracks and how high they go. Normally 9 is the maximum Influence value. Use 6 for a shorter game, and 12 for a longer. Difficulty is also based on this, on the number of game controlled nations, and on nations using the strategy track. The number of game nations is at least one. Although, two or three gives a more dynamic game experience.

Each player takes the role of a privateer captain in the service of a colonial super power. Each captain has a female and male variant, one per side of the sheet. A captain has three values, Combat, Cunning and Health, plus abilities and usually one drawback. During play the captain has a ship, crew cards, assets (ship upgrades, equipment, abilities and allies). A ship has values for Sails, Hull and Cannons, and sometimes extra abilities. 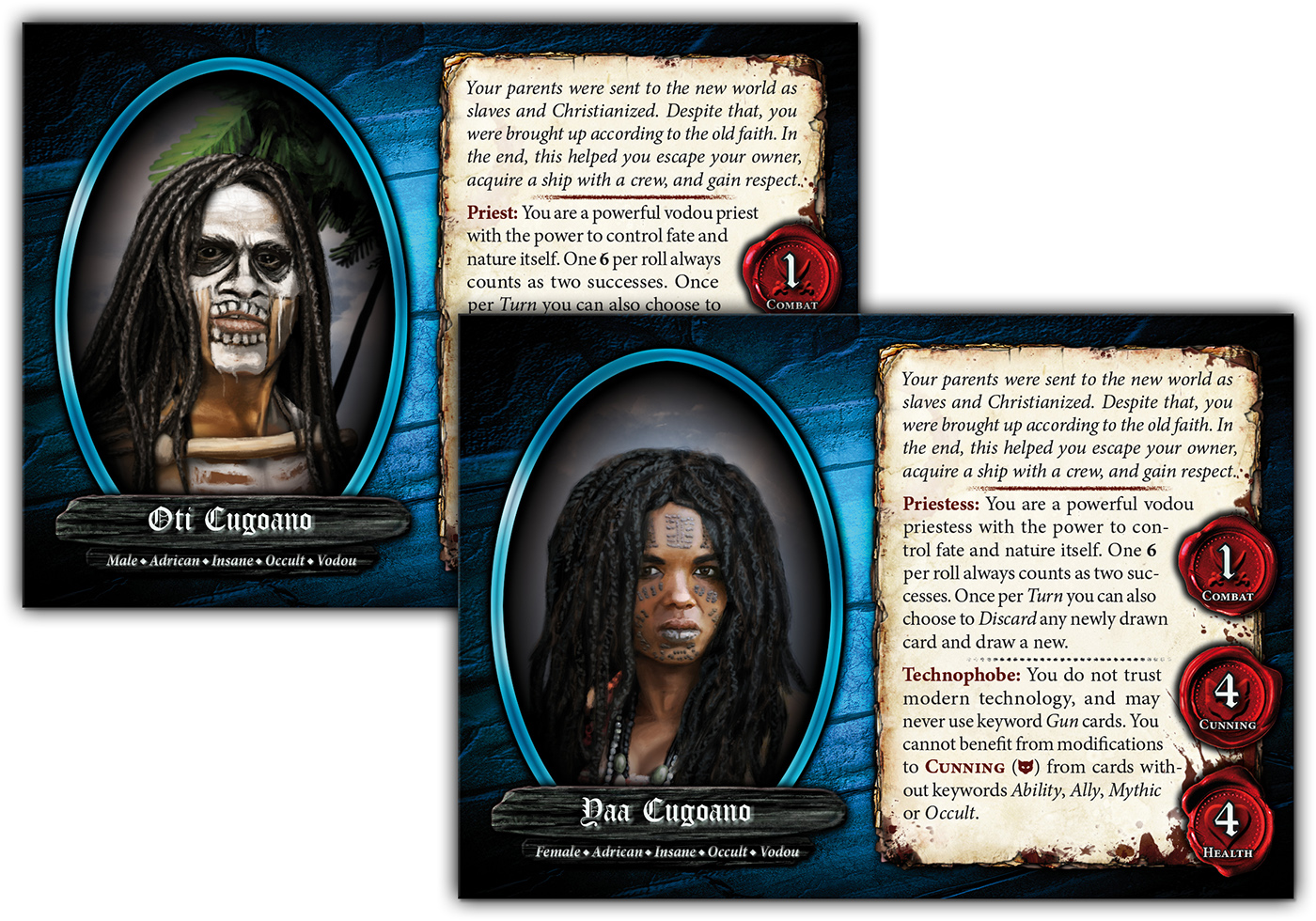 When testing a stat value a number of dice equal to the value is rolled. Someone attacking using Cannons, with a total value of 4 (from ship plus cards), rolls 4 dice. Rolling a 5 or 6 usually means a success/hit.

The game turn is divided into three phases.

First the players move, fights, draw events and perform actions. Each team acts in the order determined by the influence board. Every team member moves at the same time, up to their Sails number of spaces.

Players attacking someone then handle their battles, one at a time. They are resolved using battle cards describing the action and how ship markers act. Battles may move between engagement (using Cannons), boarding (using Crew) and duel between captains (using Combat). The winner takes the enemy as a trophy and gets a number of loot or crew cards, or even the enemy ship. 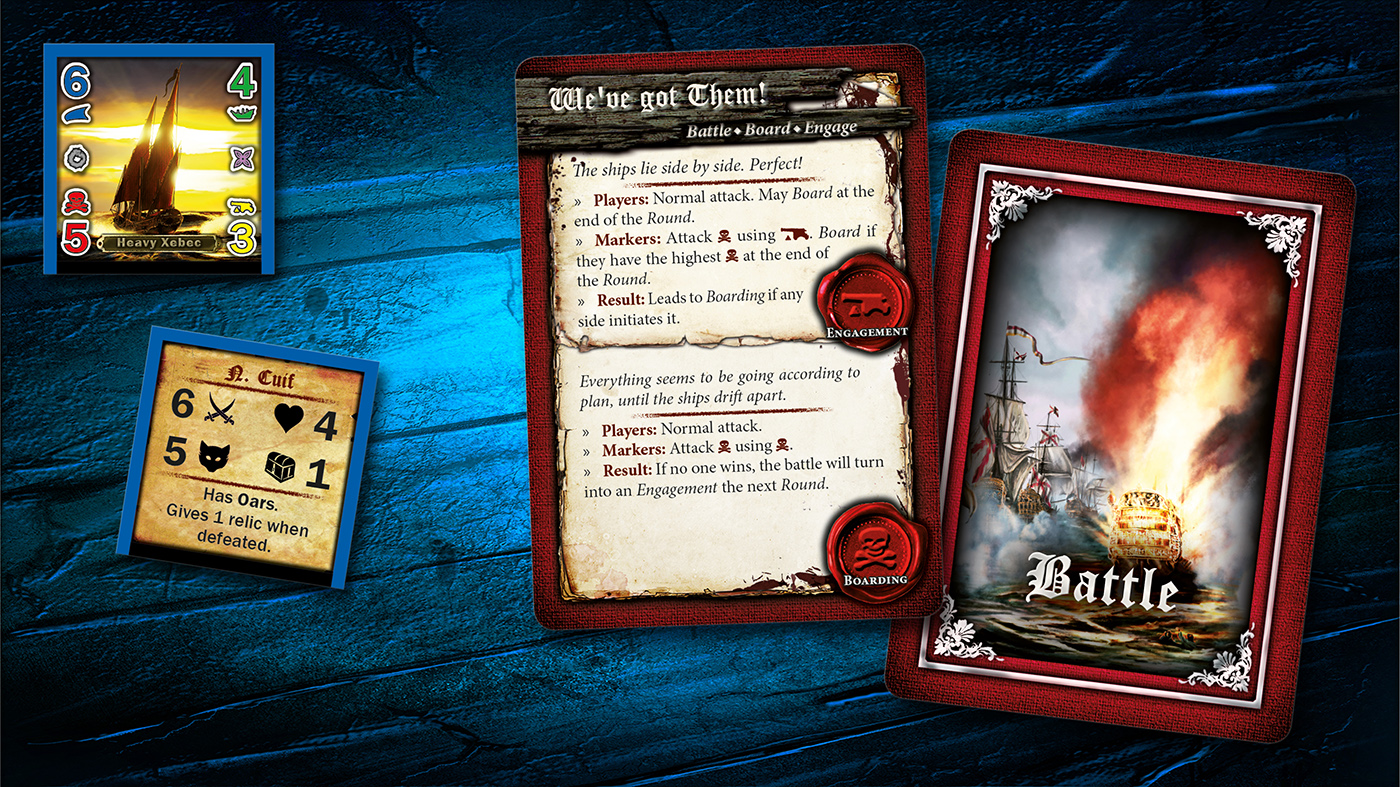 Next step is to perform free action. This often means using, discarding or trading cards in a colony. When all team members are finished the next team acts.

When the game controlled nations fight back, an influence card is drawn and resolved. This often leads to Influence adjustments, new ship markers, special politics effects entering the game or something bad for the players.

This is when strategy is handled and Influence adjustments are made. Each strategy track in play is read and markers added to the game. Next each nation’s trophies are counted. The nation/nations with most trophies gains +1 Influence and those with least trophies gets -1 Influence. The strategy tracks are adjusted by the same amount. In this way losing nations get reinforcements while winners gain extra colonies and Influence. 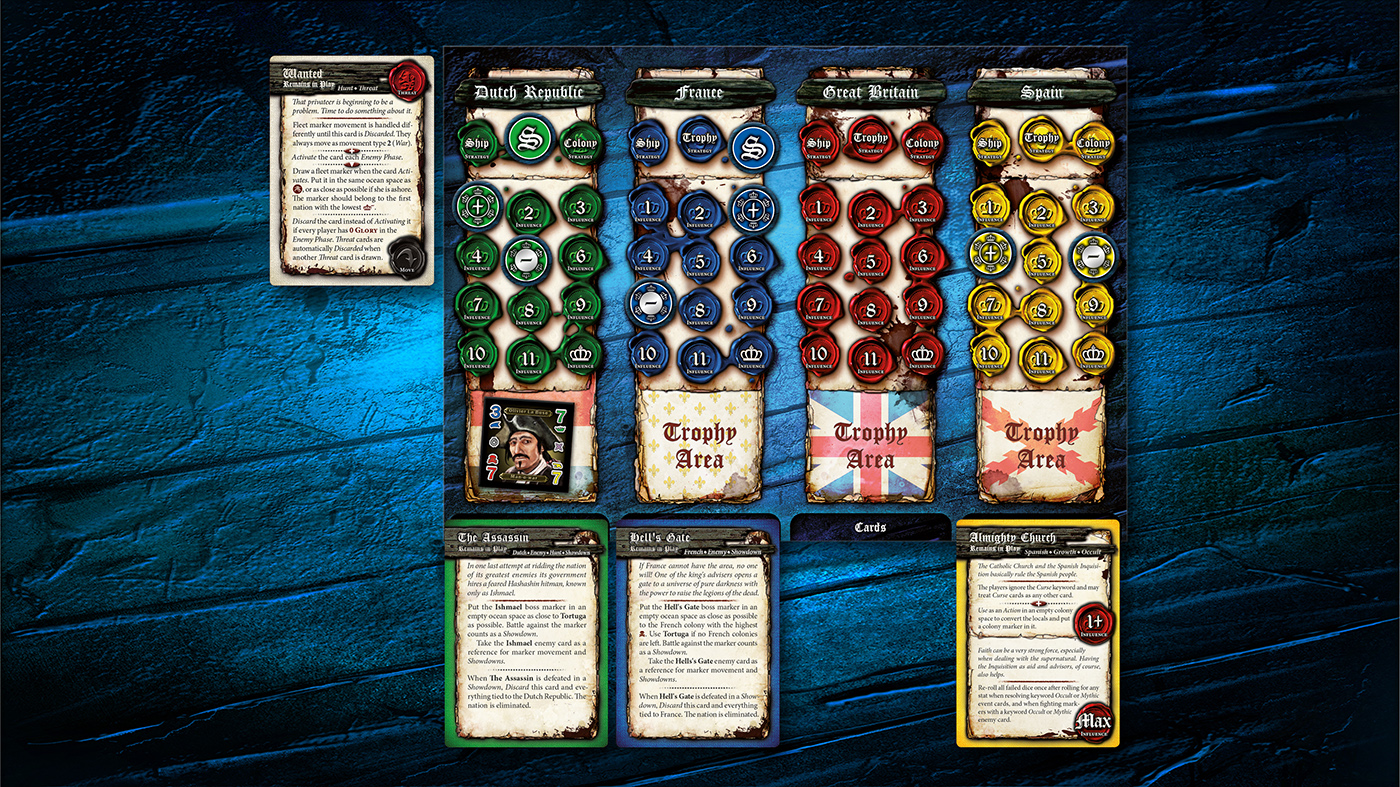 The last step is to check if someone has been defeated. Player nations with a minus token on 0 Influence lose, but continues play until every player nation has lost.

Game controlled nations with 0 Influence are defeated and immediately play their defeat card and secrets. A defeated nation is removed from the game when its defeat card is discarded. In most cases it can only be discarded by defeating a boss marker in a showdown. A boss can be anything from the avatar of an Aztec storm goddess to a very large and heavily armed ship.

Reaching maximum Influence with the plus token means every other nation gets -1 Influence each turn. This is a form of built in timer, to make sure a game always ends within reasonable time.

The booklet is not finished. All the rules and most of the graphics are in place, but the booklet is not yet proofread or properly edited. Some things may also change before the game is released. You can download the rules from: http://www.mylingspel.se/files/privateers_rules.pdf

The rules booklet also contains a demo of a solo play game turn. Read it to get know how the game plays. 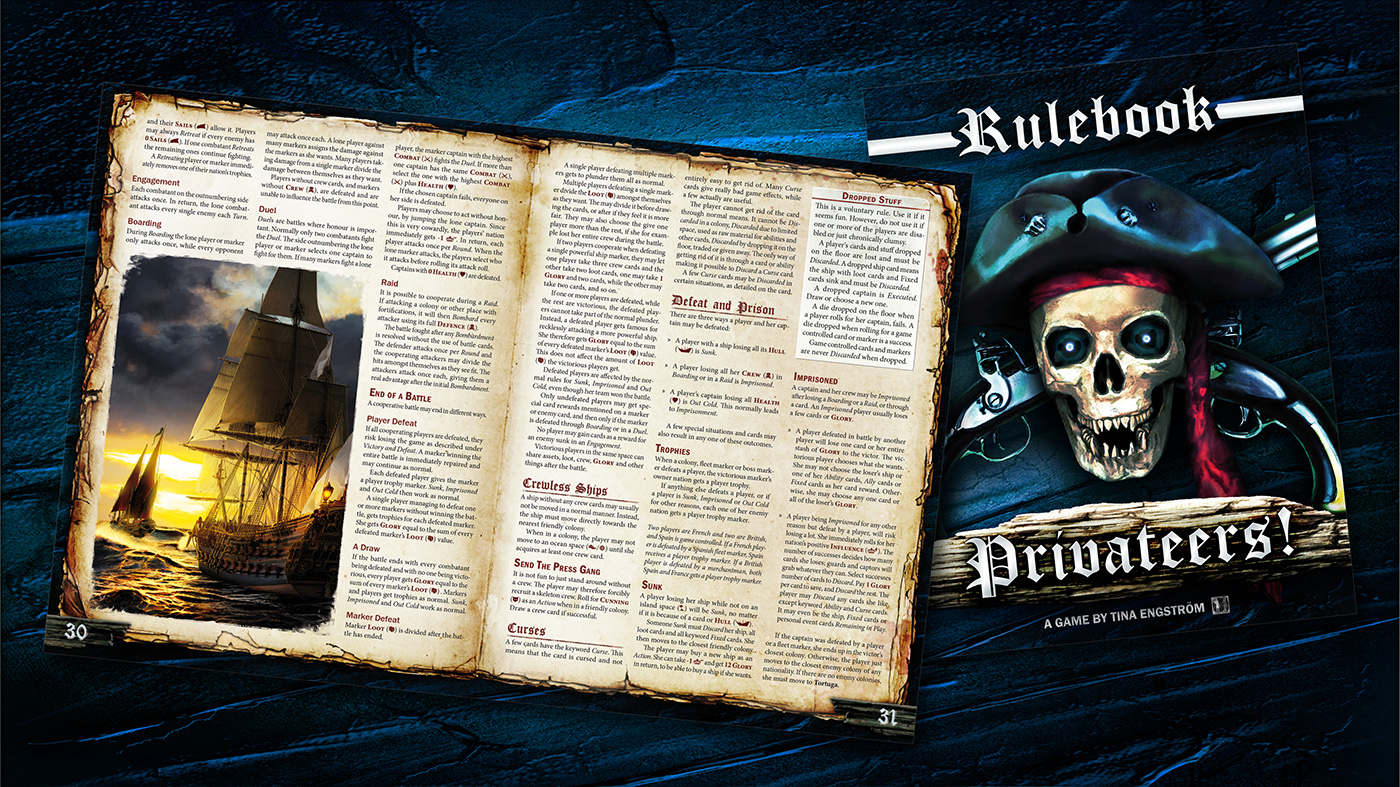